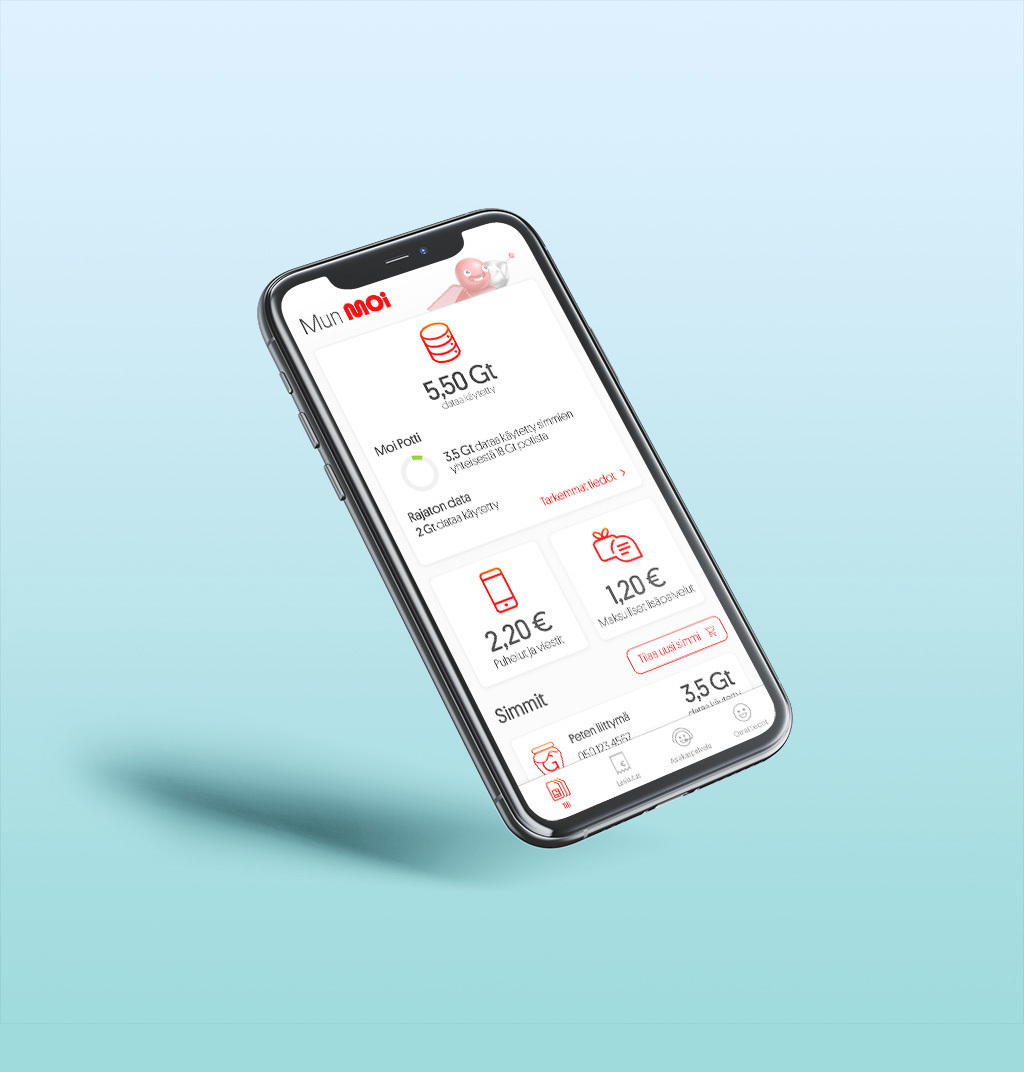 Full self-service Flutter applications for a digital forerunner in the operator business.

An application so good that you never have to call customer service. A digital mobile operator challenges the big players with the best digital customer experience, developed together with us.

Moi Mobiili – part of DNA Group – is one of Codemate’s key customers. Moi Mobiili is a modern teleoperator that has been disrupting the operator market in Finland since 2016.

Moi’s goal is to be a lean and honest operator that focuses on customer encounters. This matches with our values perfectly.

Moi Mobiili wanted to rebuild their B2C application called Mun Moi as the old one did not support new feature ideas and newly launched products. The purpose of this application is to offer Moi’s clients a possibility to manage their account details and subscriptions and to follow their subscription’s data consumption on the go.

A clear goal and tight schedule made it obvious to us that agility and right technology choices were the key to success. Our team consisted of a UX/UI Designer, two Mobile Developers, Test Engineer and an Agile Coach / Project Lead. First we created a mobile application to support Moi’s new customers. We managed this task so efficiently that, with a mutual decision, we decided to make the new app available also for the existing customers.

Moi’s team was able to test the new application starting from sprint one and every two weeks after that. The tasks were planned and prioritized together in sprint meetings. Thus, the entire team was constantly aware of the status of the project. We managed to create the freedom for Moi to select the release date completely based on their business needs and priorities. The first release was timed to the Ice Hockey world Championships in 2019 where Moi was a major sponsor.

We chose Flutter cross-platform technology for implementing Mun Moi apps. We’ve used Flutter in other projects and found it to be a perfect technology choice for Moi because of the tight schedule and nature of the app features. We were pleased how efficient it was to develop a high-performance, beautiful application simultaneously for iOS and Android with Flutter.

Late 2020 when the mobile apps were getting more mature, we found ourselves in an interesting position. Google had just opened Flutter Web capabilities on beta channel, essentially making it possible to compile browser based web apps from the same Flutter code base. Mun Moi web app had been originally done with React and its development speed had decreased and the UI wasn’t on the same level as the mobile app.

Moi gave us the chance to do a prototype of the web app with Flutter and see how it works. Tom, who had taken the role of a lead developer, made the first working prototype in less than a day! We were very surprised how well the beta phase web capabilities worked in practice. It took another two months to make the web app work smoothly with different screen sizes and devices. Mun Moi web app was officially launched and its birth story was explained in March 2021 in a Flutter Web meetup, where Google also joined.

Moi is now able to publish new version of the apps much quicker, even several times a week. The same compact team can handle design and development for mobile and web, since Flutter enables development with a single code base.

Mun Moi app has received highly positive feedback on Google Play and AppStore, where it has gotten 4-5 star ratings all around. The amount of phone calls to the customer service has dramatically dropped as customers are able to help themselves with the new digital services.

The collaboration with Moi Mobile continues as Rebels keep dropping new features for the customers of this forward-looking operator.